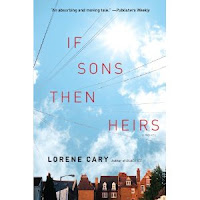 If Sons, Then Heirs is a complex novel about family, legacy and land. For generations the Needham family has owned and worked the land in South Carolina, but after the patriarch, King is murdered and World War II,  most of the members made their way North leaving only Selma, King’s widow, behind. Alonzo Rayne, the 30 year old great-grandson of King, is one of the few who has stayed in touch and made annual pilgrimages back. On his latest trip it becomes clear that Selma is too old to maintain the property any longer and Rayne wants to sell the land and use the proceeds to provide housing and care for her. Selma has other ideas and doesn’t want the land to leave the family. But complex “heir property” laws make it impossible to do anything without the consent and participation of the entire family and Rayne isn’t sure if this is something he wants to tackle.  All of this coincides with the re-appearance of Rayne’s mother, who abandoned him in South Carolina when he was 7.

This is a compelling family saga that mirrors many stories of African-Americans in the South who have struggled to survive and hold on to land that others have tried (and in a lot of cases succeeded) to take away from then legally, illegally, and sometimes violently.  It also illustrates the the great migration North of people who no longer felt safe or that they had a viable future there.  My only issue was that the explanation of the entangled heir property laws left me confused a lot of times. But the rich, deep characters portrayed by Cary kept me completely engaged. Another one on my best of the year list.

This site uses Akismet to reduce spam. Learn how your comment data is processed.